Mobile app helping you to find a lawyer

Imagine you have a law-related issue. Who will you ask for help? LawOn is a start-up offering access to hundreds of lawyers via its mobile app

Description and pictures below 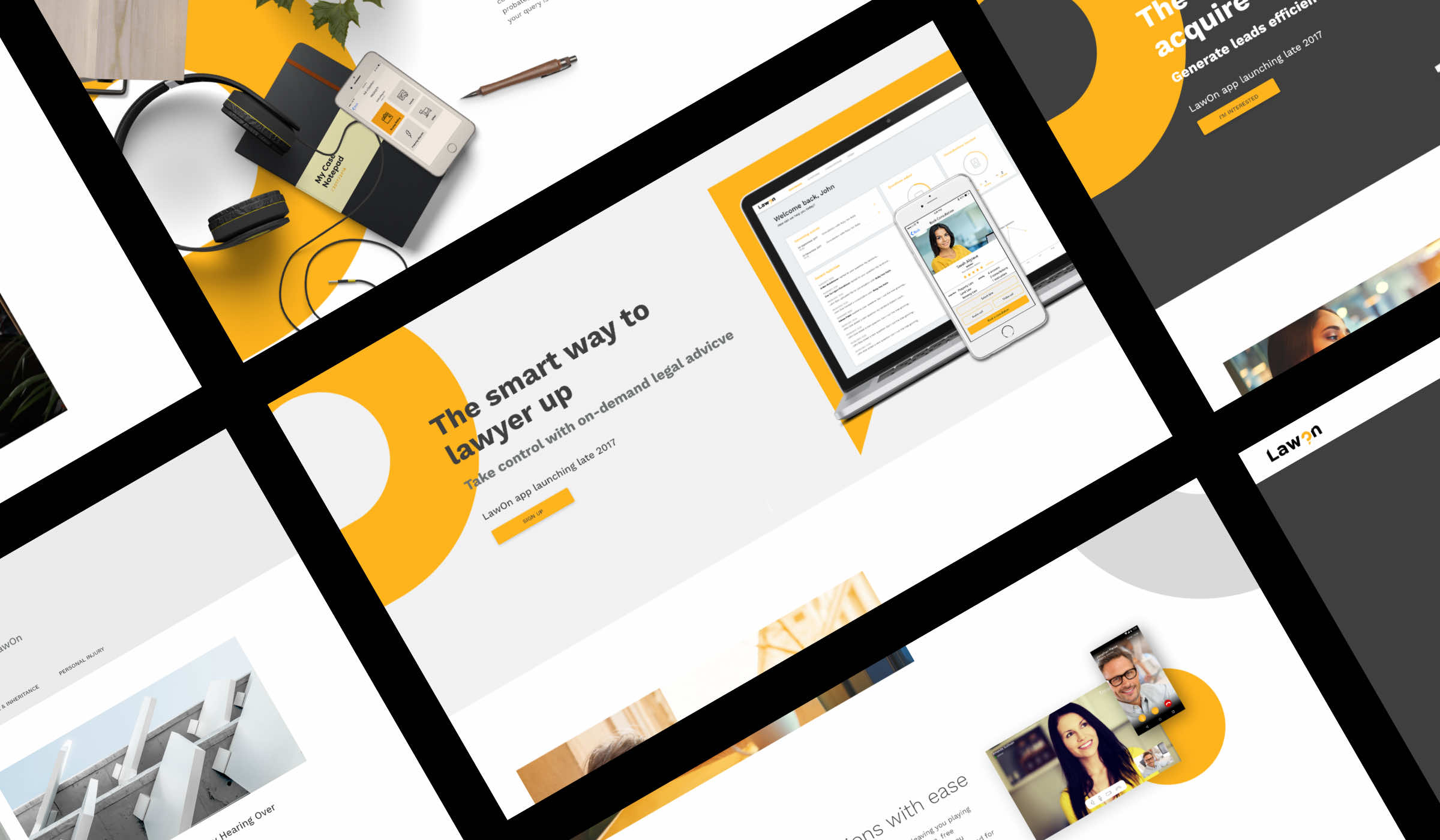 How do you choose a lawyer if you need one? Do you google them, ask a friend for a recommendation, pick up the one you pass by every day…? And how do you know if it’s the good one for you? This is where LawOn comes in.

LawOn is a Manchester-based startup set up by a former solicitor to deliver easy access to legal services in the UK, and trying to answer to the common problem of many people in the UK - choosing a right lawyer.

The product you can see now it’s a second iteration of the idea. The first concept designed by other company was not sufficient enough to make a significant impact on the market. This is when I was asked to step in.

I together with the founder pulled the plug from the existing development and decided to go back to the drawing board to rethink the idea and implement appropriate UX techniques to design a good product.

Firstly to understand if the product idea is feasible I have performed a research with potential users to recognise their problems and needs regarding choosing a lawyer. It was an exciting experience to hear all these stories of searching, choosing the right lawyer or dumping the wrong one. As I hoped all respondents were excited about the product idea and confirmed it would help them to achieve the task.

Our target group was mainly people between 25 and 50 years old, savvy mobile users, who are living at a high pace and do not have time for googling solicitor firms around. They face lots of struggle beginning from rent flats related issues, buying their first house, selling the house, setting up a company, getting married, dealing with conflicts at work or neighbourhood, getting divorced, fighting for kids, filing for bankruptcy, dealing with injury or death of relatives. They have too many problems to deal with to rely on poor lawyers. LawOn will help them to find the right one.

Knowing that the market is willing to find the product needed, me and the founder decided on a new name. Among many options, we have chosen LawOn. Having that I could start working on branding.

This is where the fun part begins. I spent active hours searching the market, looking for ideas, sketching ideas, drawing mind maps, choosing font and colours and finally designing the actual logo.

I have decided to use Filson Pro, a geometric font for a modern look with the twist. Its circular letter “o” was perfect for execution the idea for the symbol of the question mark.

The symbol - people seeking a legal advice or looking for a lawyer ask lots of questions. LawOn is a place where they find answers for them on the go. No matter where you are or what problem you have, LawOn is here to help you. By combining location symbol and question mark I received the strong and unique symbol which became a logo for the product.

To create a strong brand settled in a modern law environment I opted for golden yellow and charcoal grey colours. 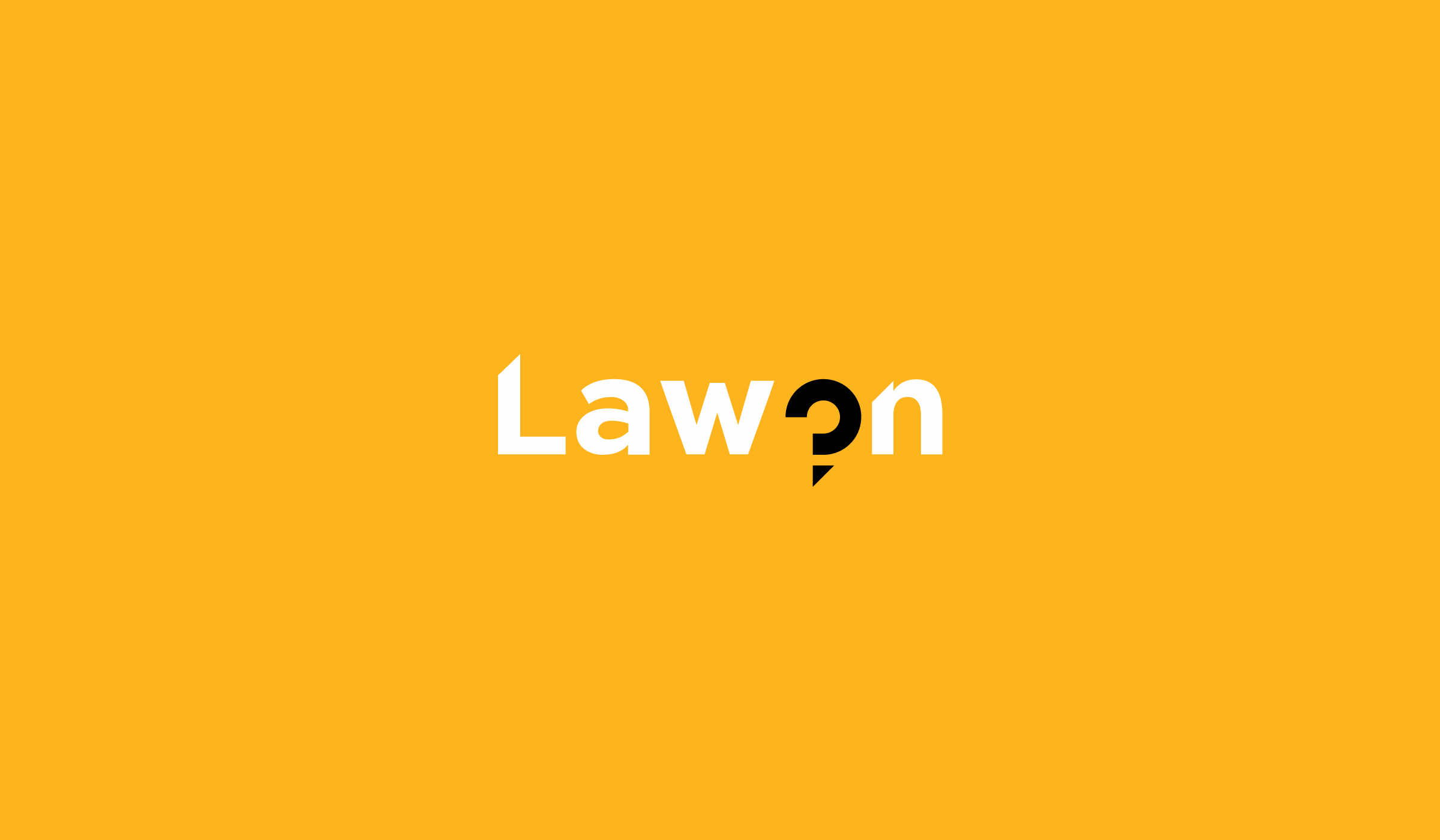 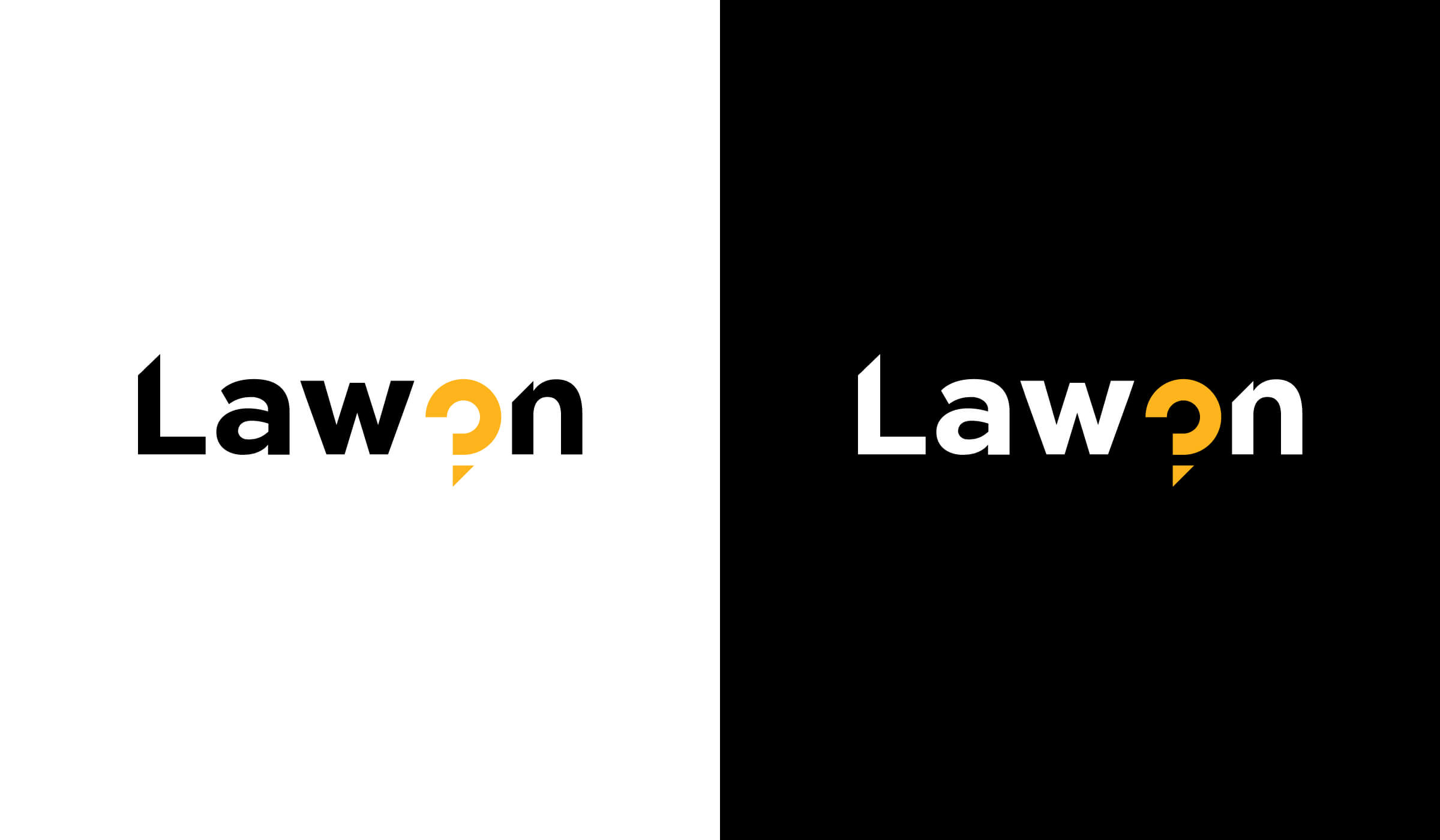 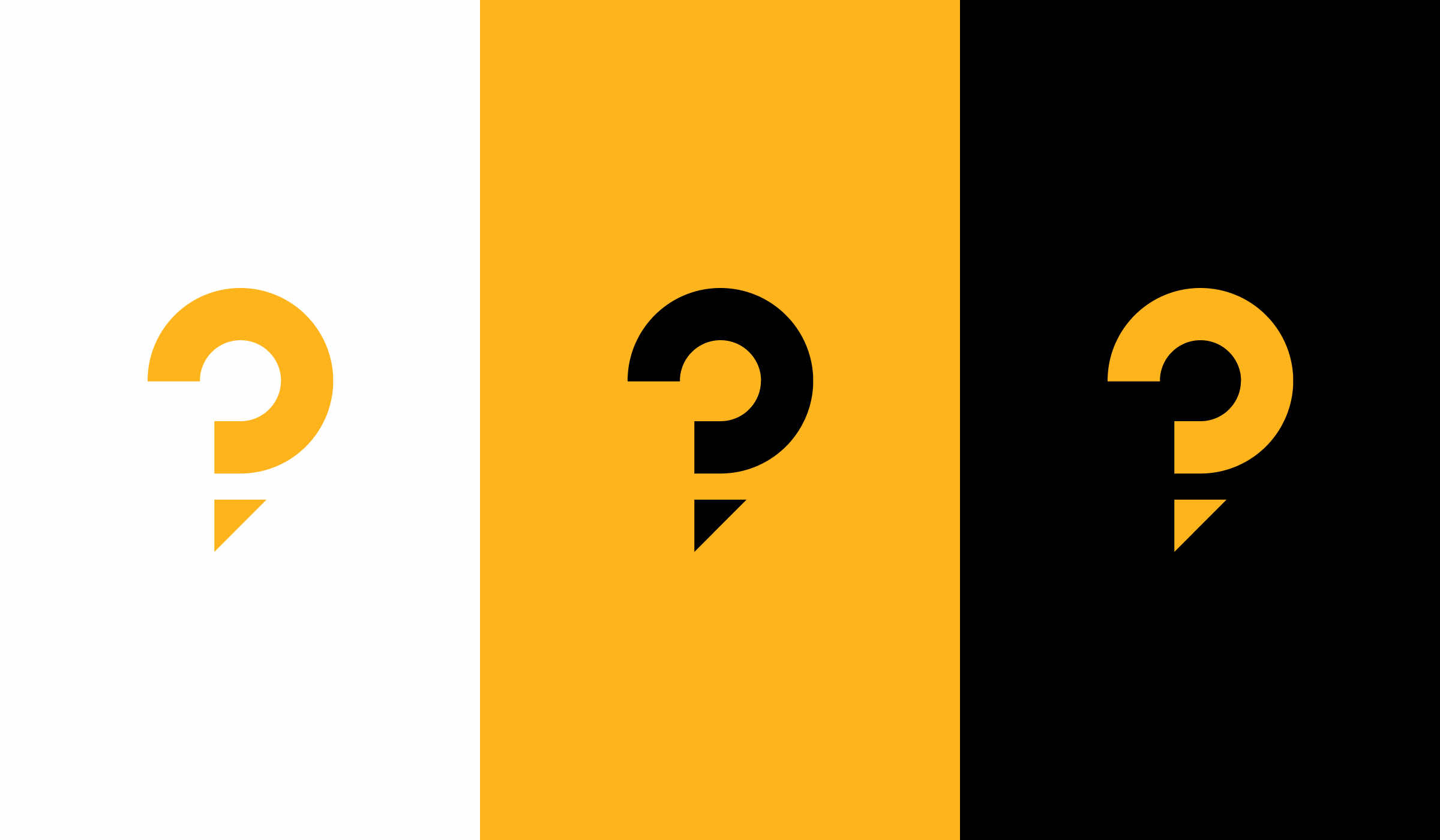 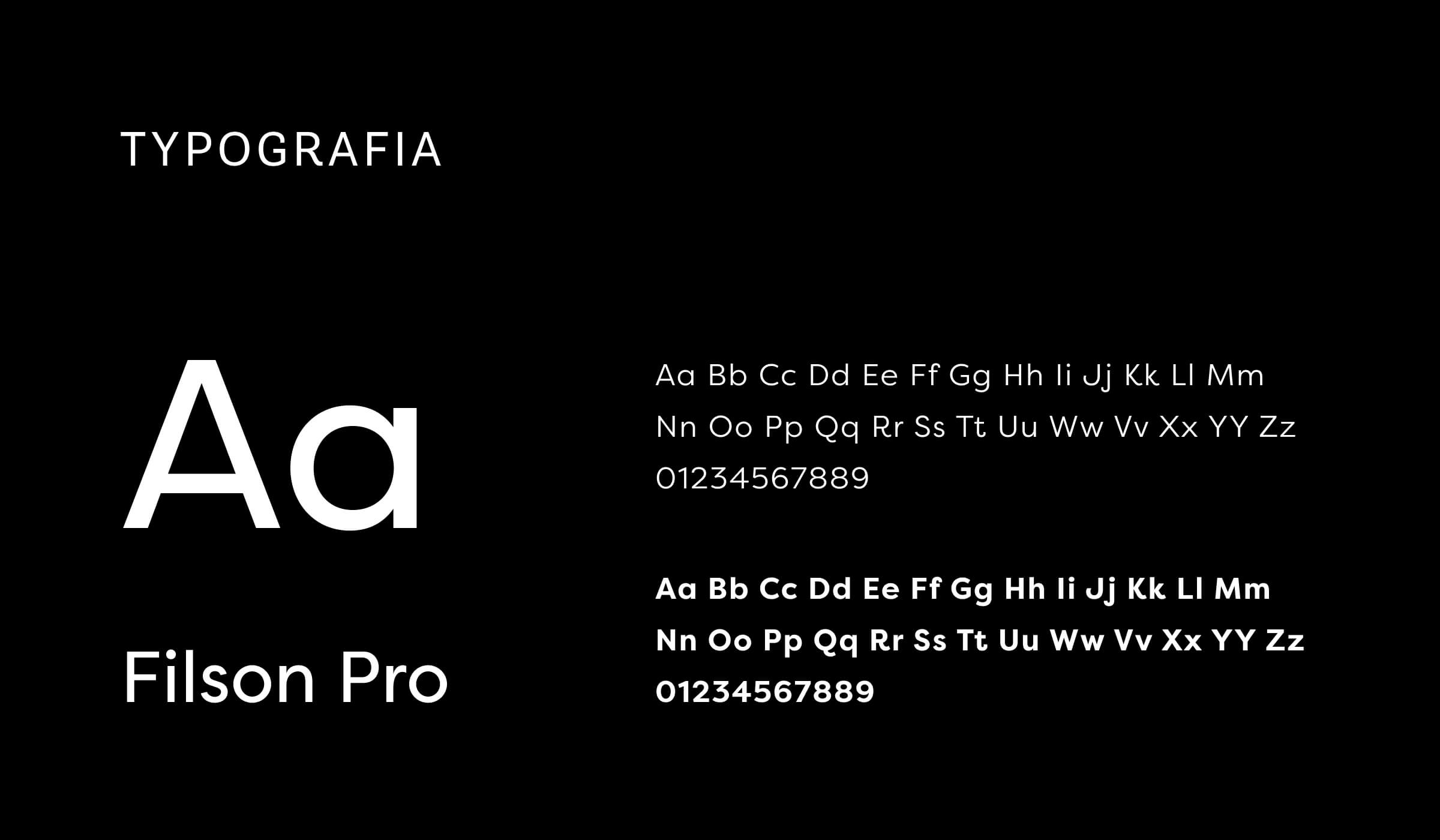 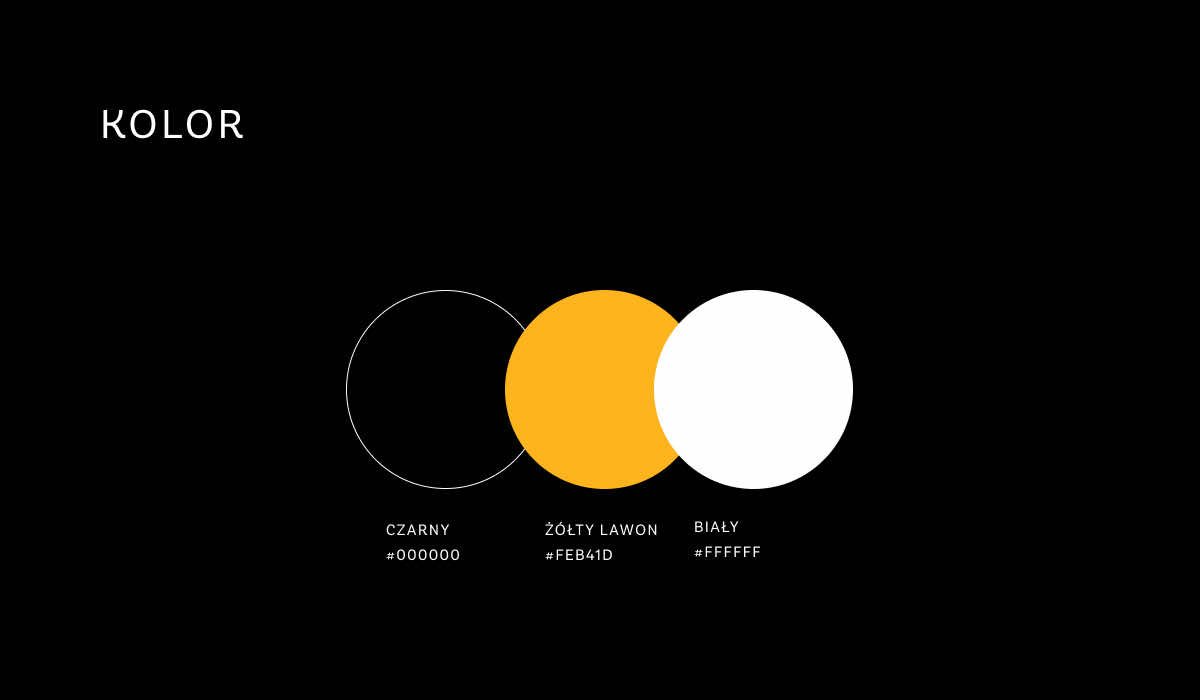 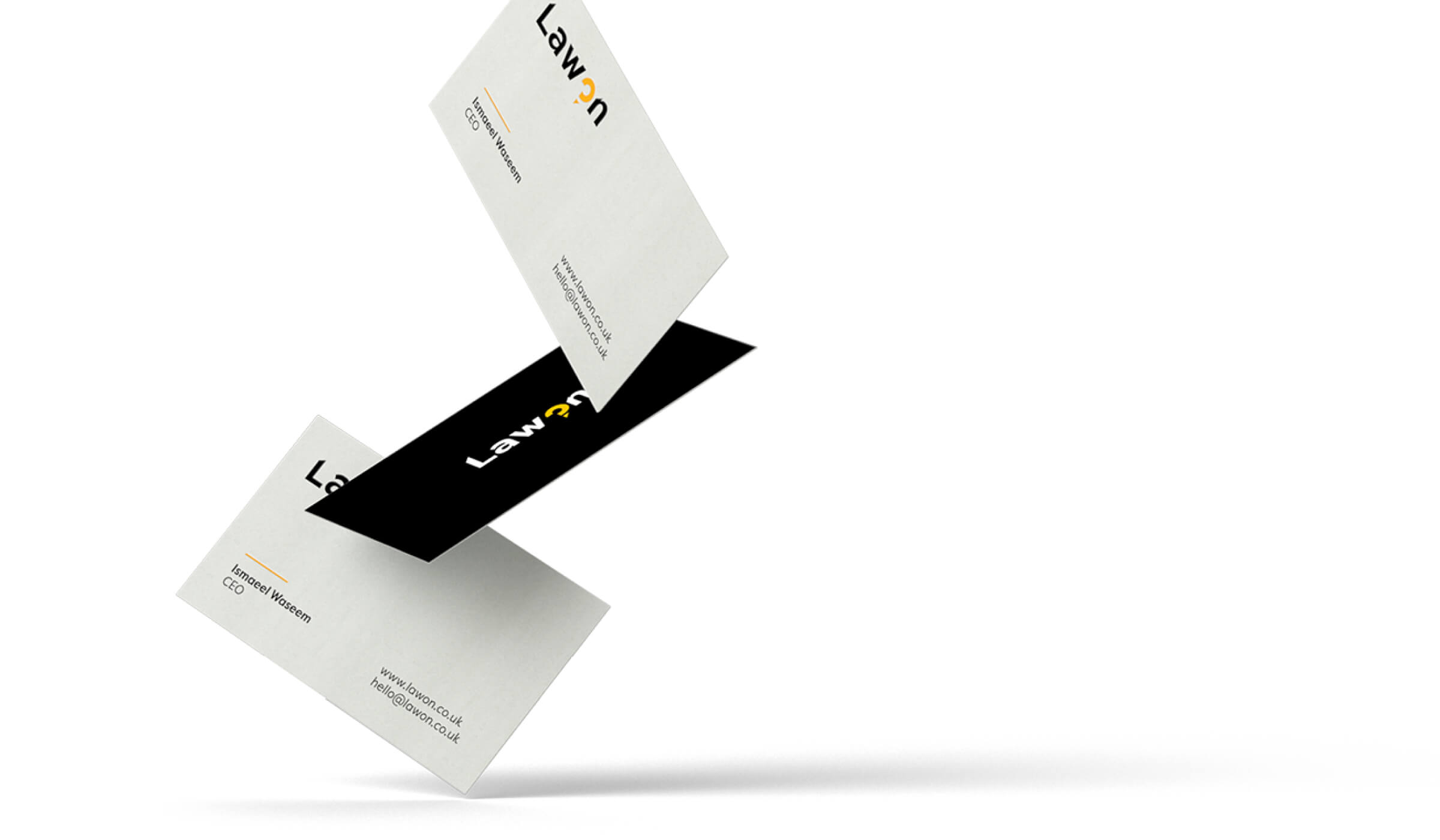 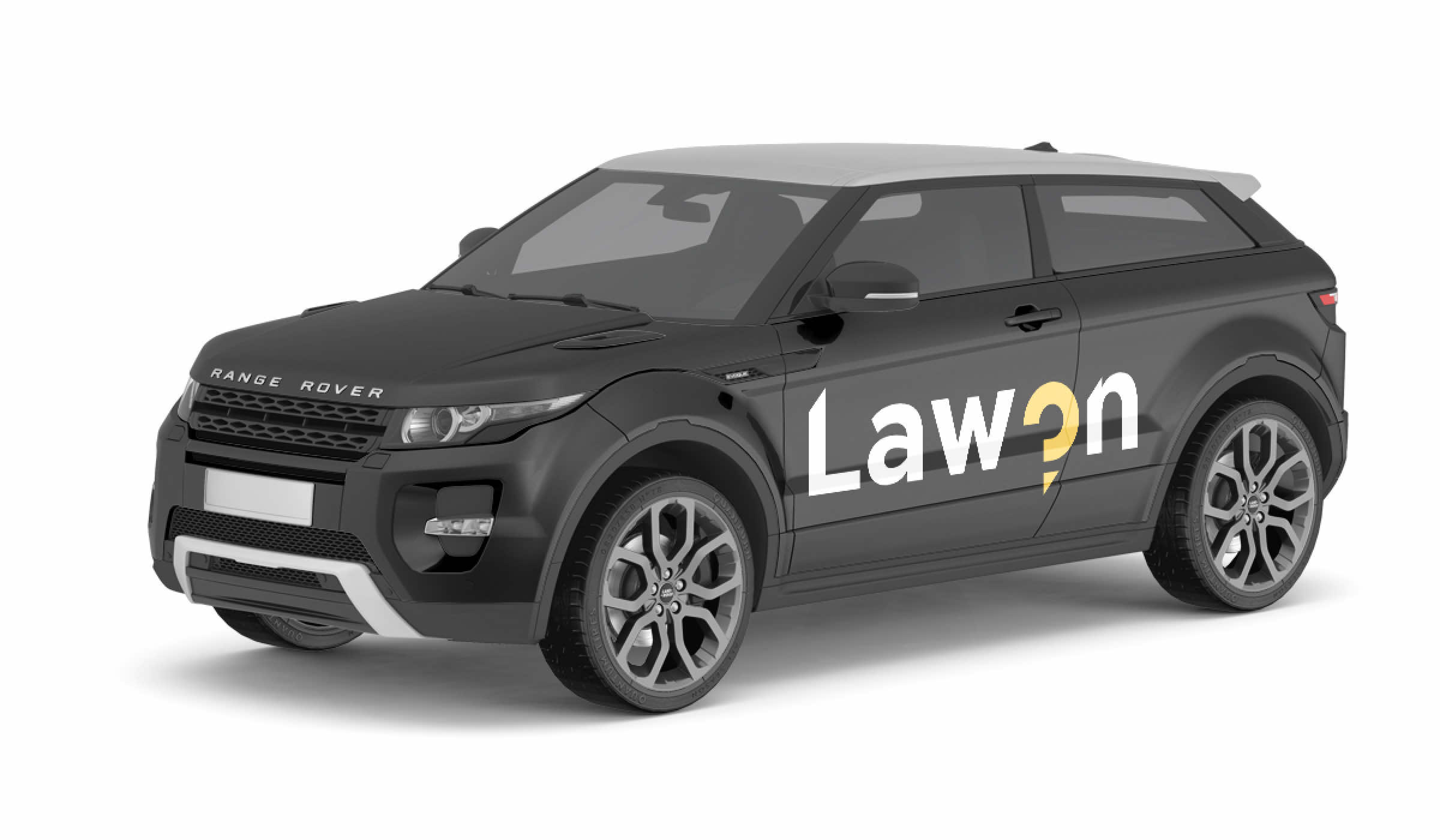 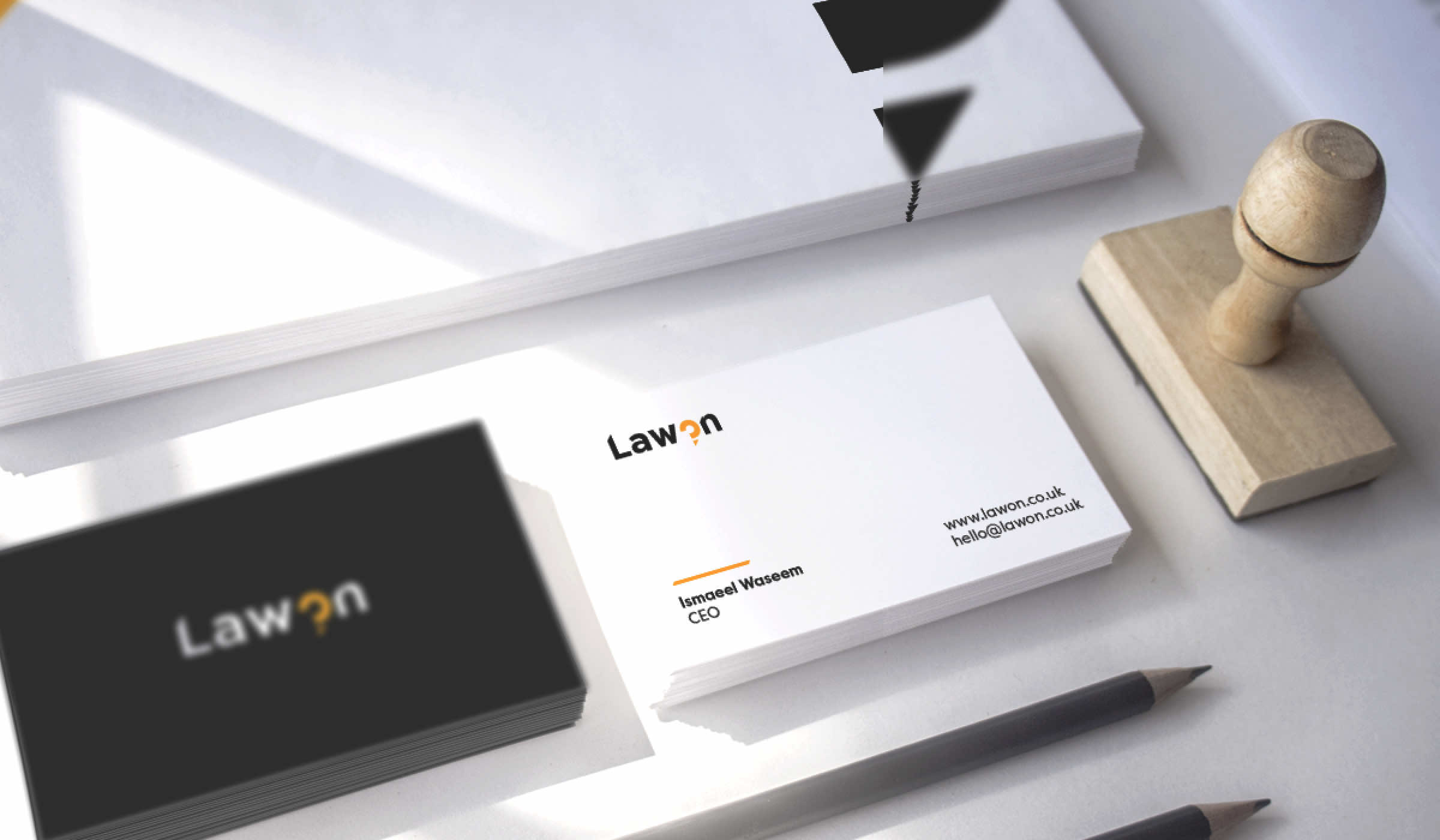 Thinking about future users, their lifestyle, needs and struggles I wanted to make sure the product allows them for a quick unrestricted access to the service. It was important so they can quickly add a question or book a consultation with a lawyer, no matter where they are and what device they use. I wanted to create a seamless experience in all worlds.

Because the nature of LawOn is to combine experts from few areas it was important for me to recognise the user problem on the beginning so they’re taken to the right department straight away. Hence why I opted for a few step process of logging the question or booking a consultation, so the system can filter out unnecessary or not relevant information on the early stage.

It was important that users can find out as much as possible about lawyers they book a consultation with, so they know exactly who they will speak to. That helps in creating a good relationship between them.

On the other hand, solicitors need as much information as possible about the issue prior the consultation so we decided to design a chat functionality, document upload, specific categories and description fields.

I have tested the early stage iterations with end users to verify whether the idea of execution is correct or not. The positive feedback I received helped me to shape further work.

To build the brand awareness I have designed a landing page explaining what LawOn is, how is it going to help users, and when it’s going to be available. We wanted also to build the base of early beta testers prior the launch. There are two versions of the landing page: one for solicitors and one for end users.

The aim of the website was also to boost a credibility and brand awareness.

There are two versions of the web app addressed to two user groups: lawyers and the public. The reason for that was lawyers have different needs from users in relation to dealing with the legal case. Hence why they needed another set of tools and the design had to be different.

The biggest challenge I had here was to match the expectations of two groups and to design perfect links between actions made by end users and lawyers. Every step performed by the user had to have a relative representation of the lawyer app version. I think I have achieved the main aim although further work will have to be done.

To allow end users to deal with lawyers on the go (as per brand meaning) I have designed a mobile app. According to market research, the Android platform has the biggest market share within the target user group so we have decided to design an Android app first and then to follow up with the iOS app.

But what I wanted the most to achieve a common environment between these apps, so I have decided for the visual language that will work for both environments.

At the moment of writing this, the Android app is under development and should be available for beta testing later this year. 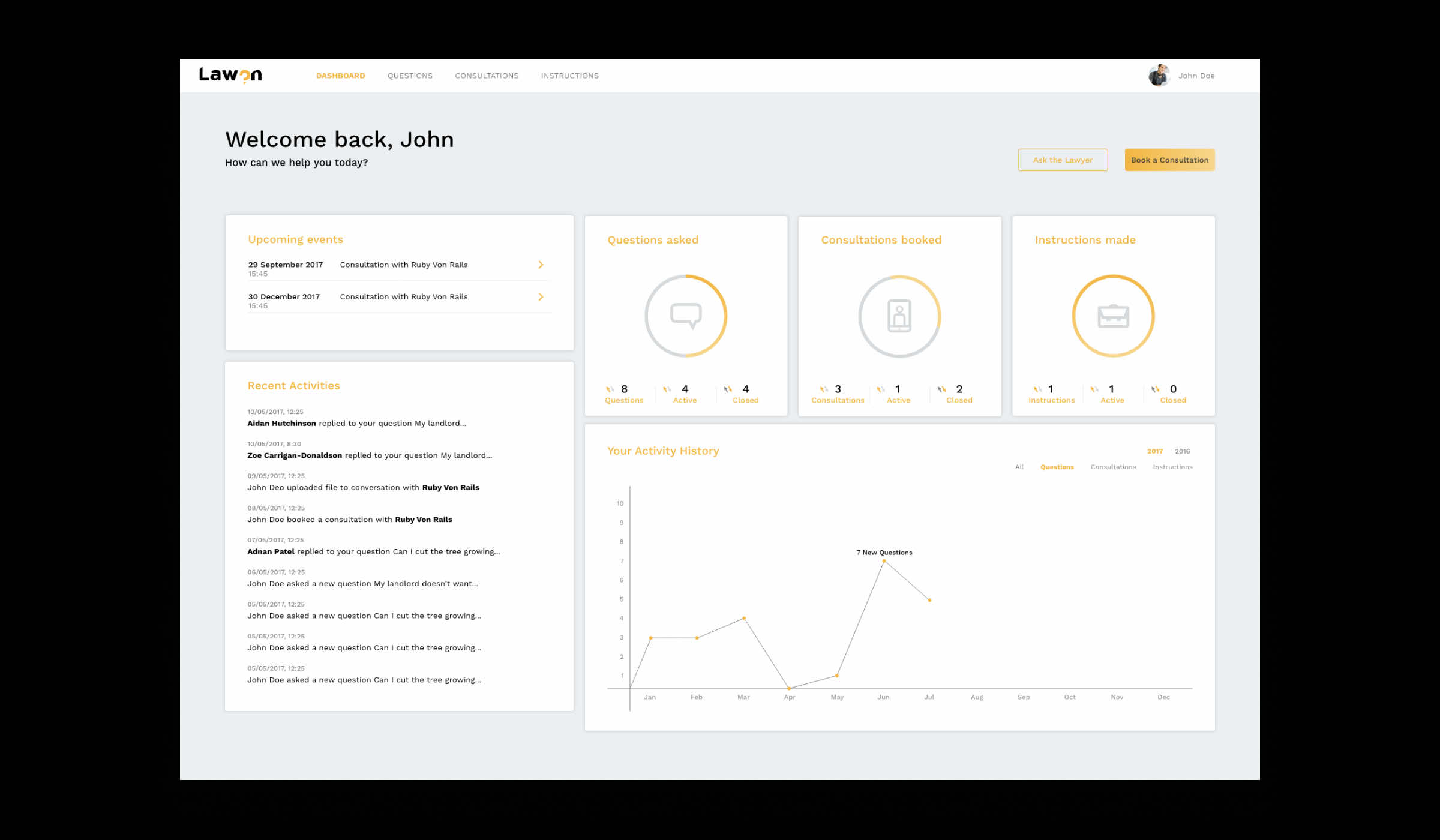 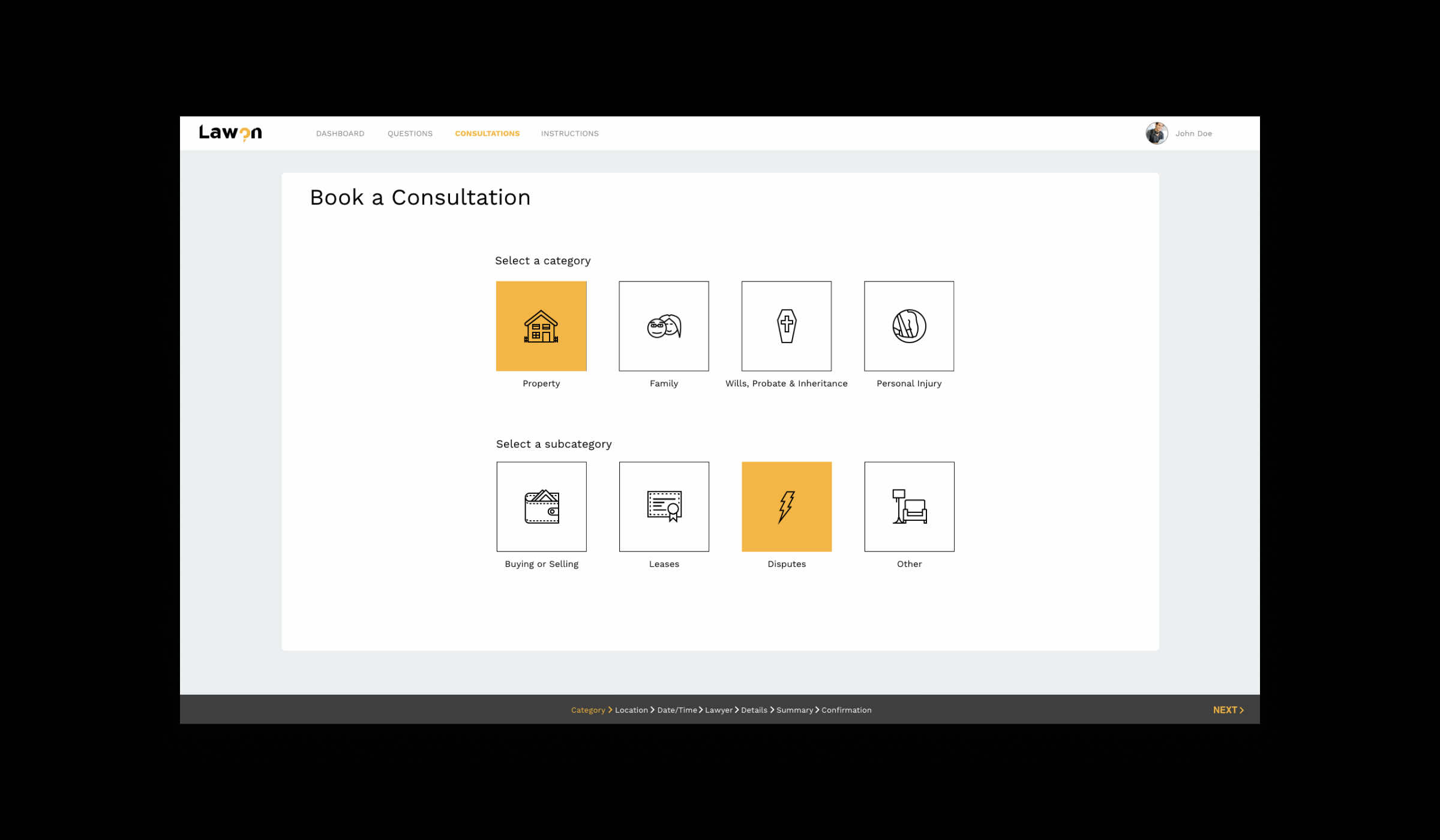 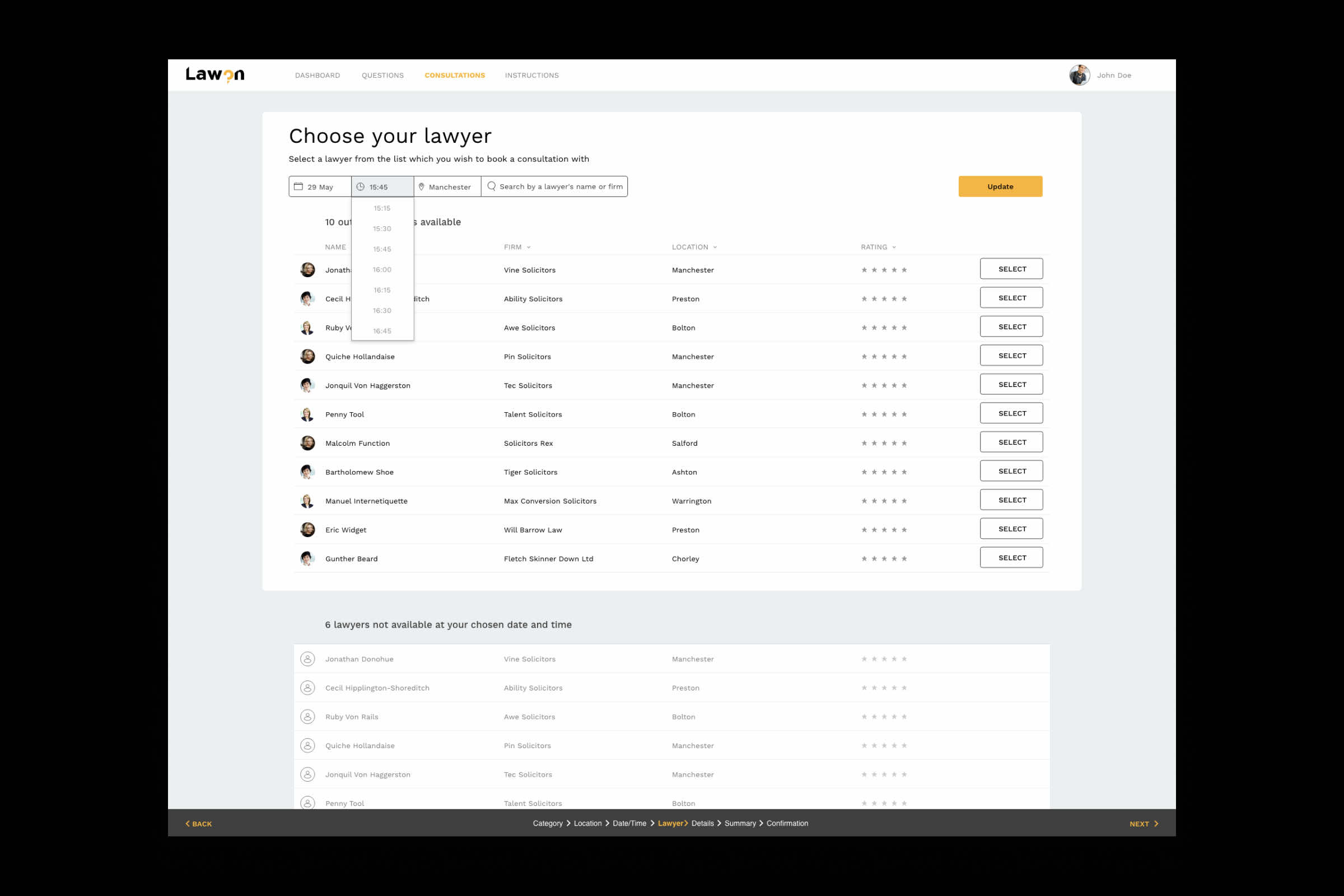 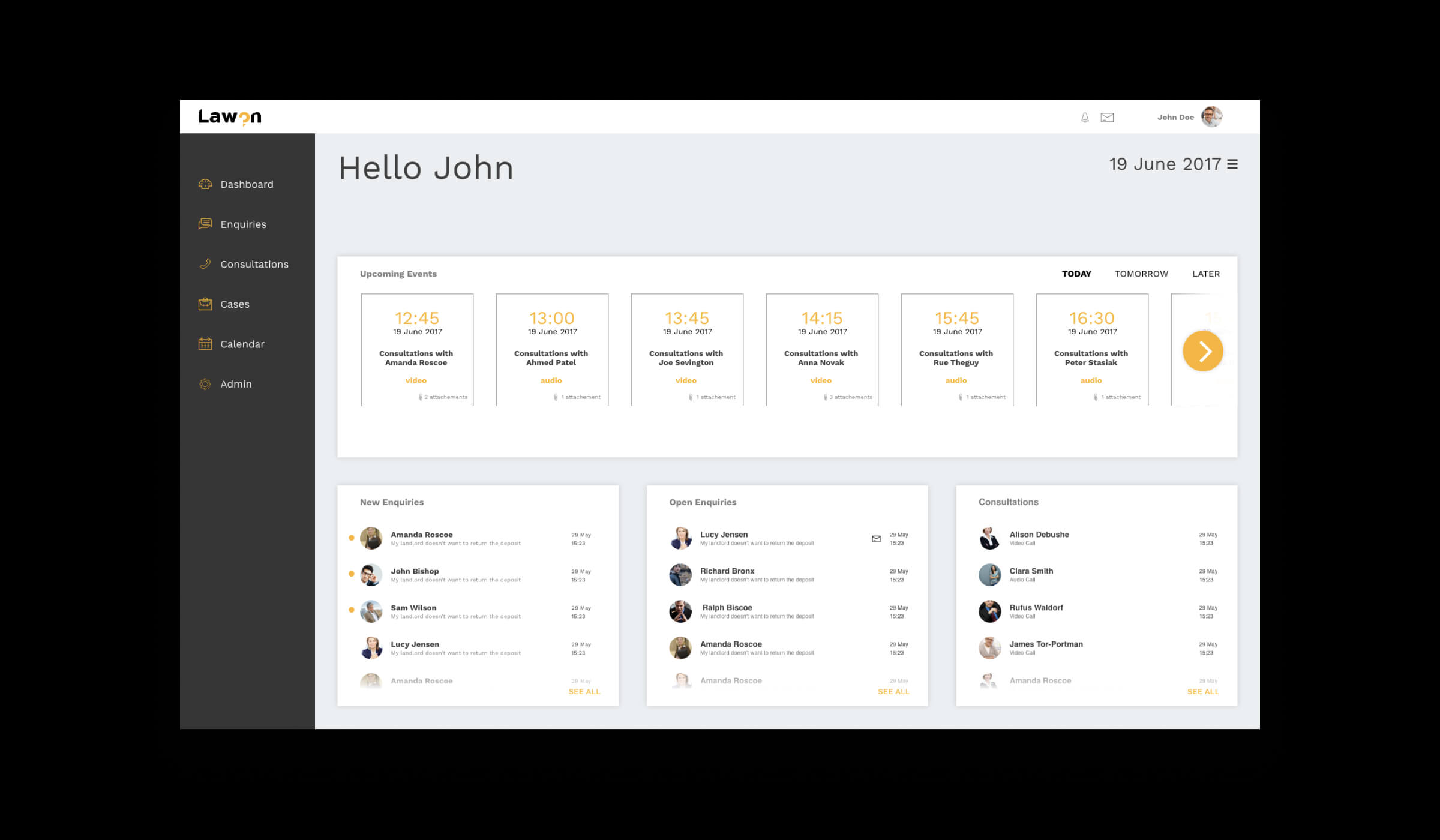 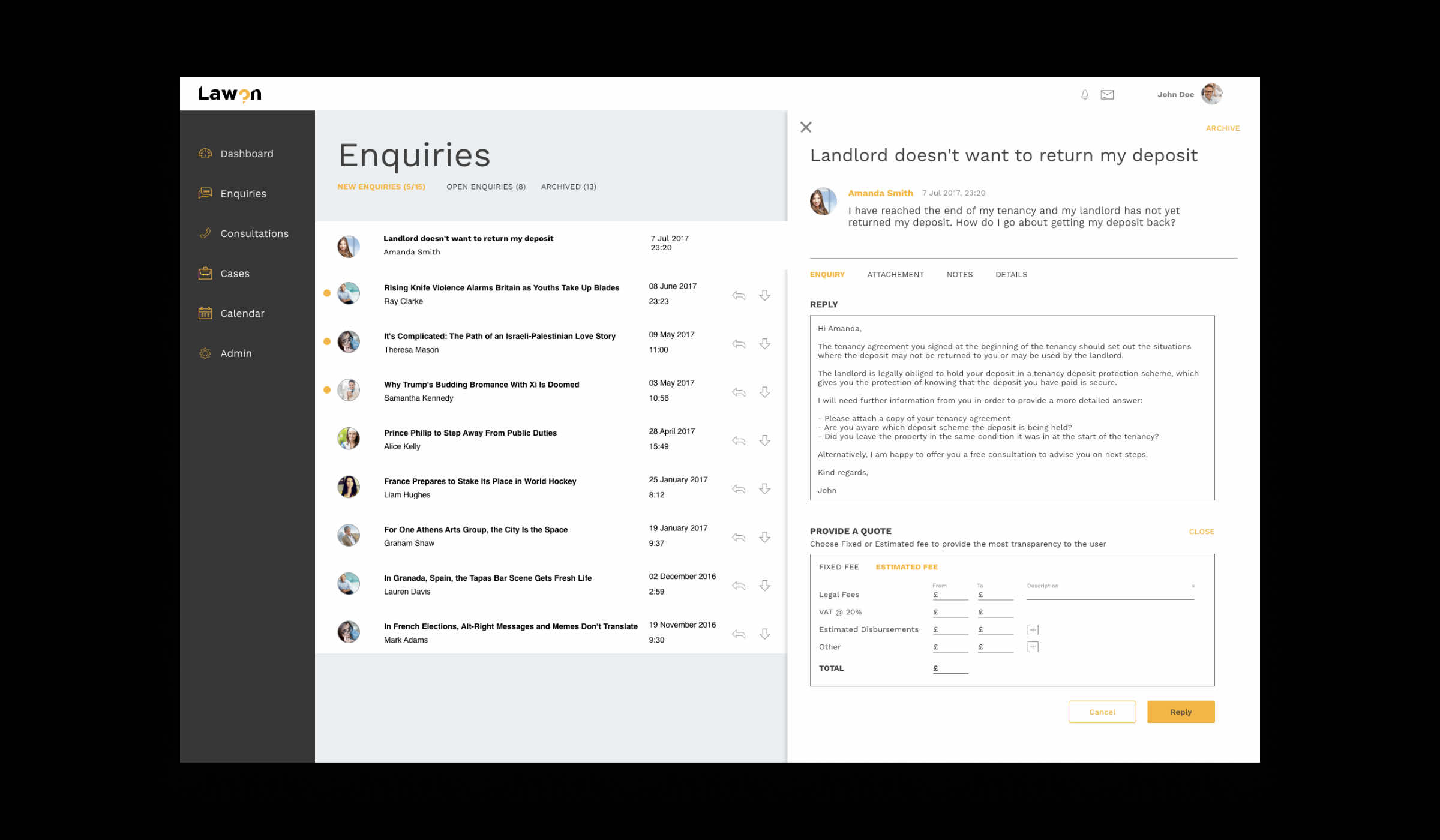 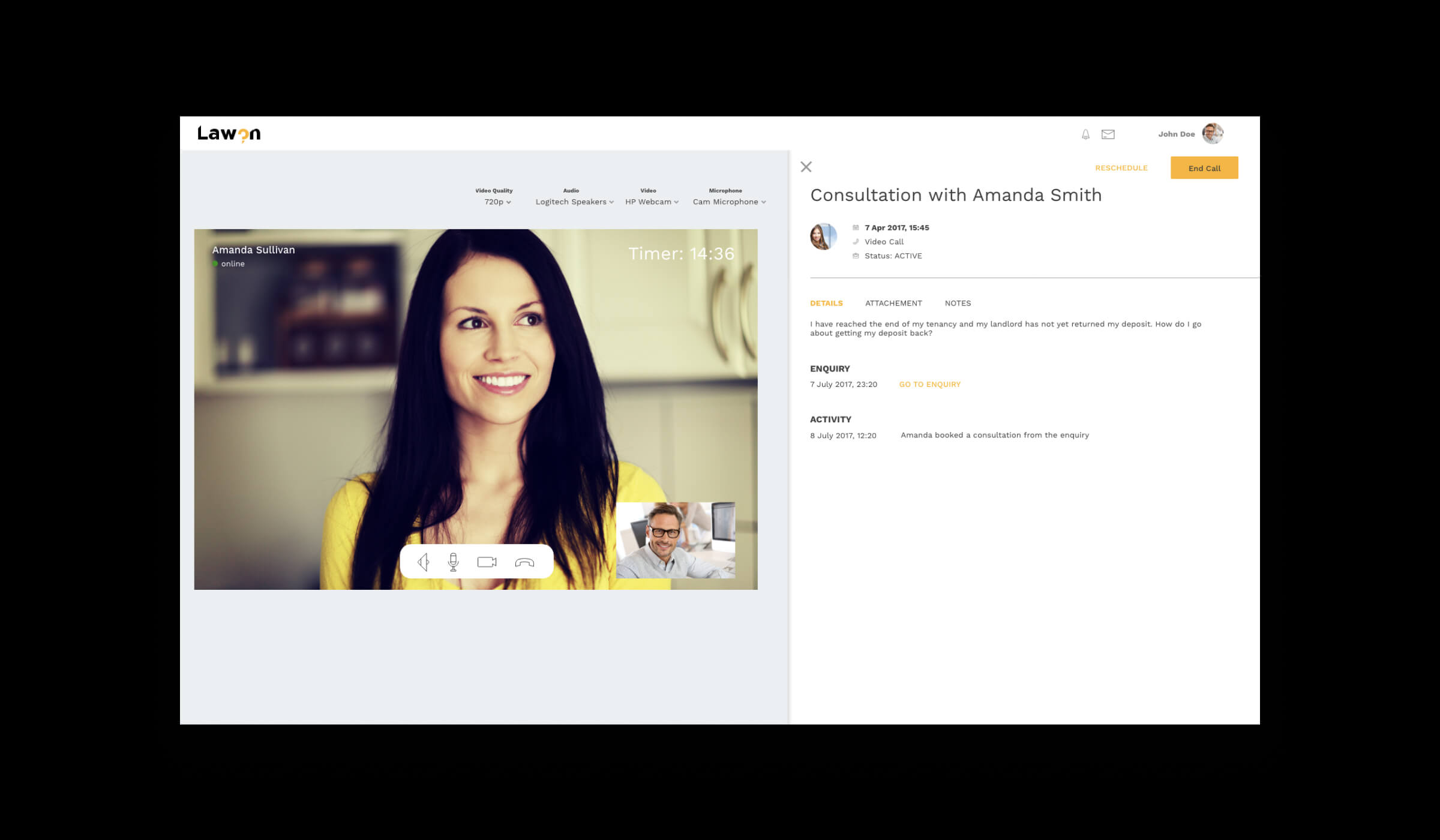 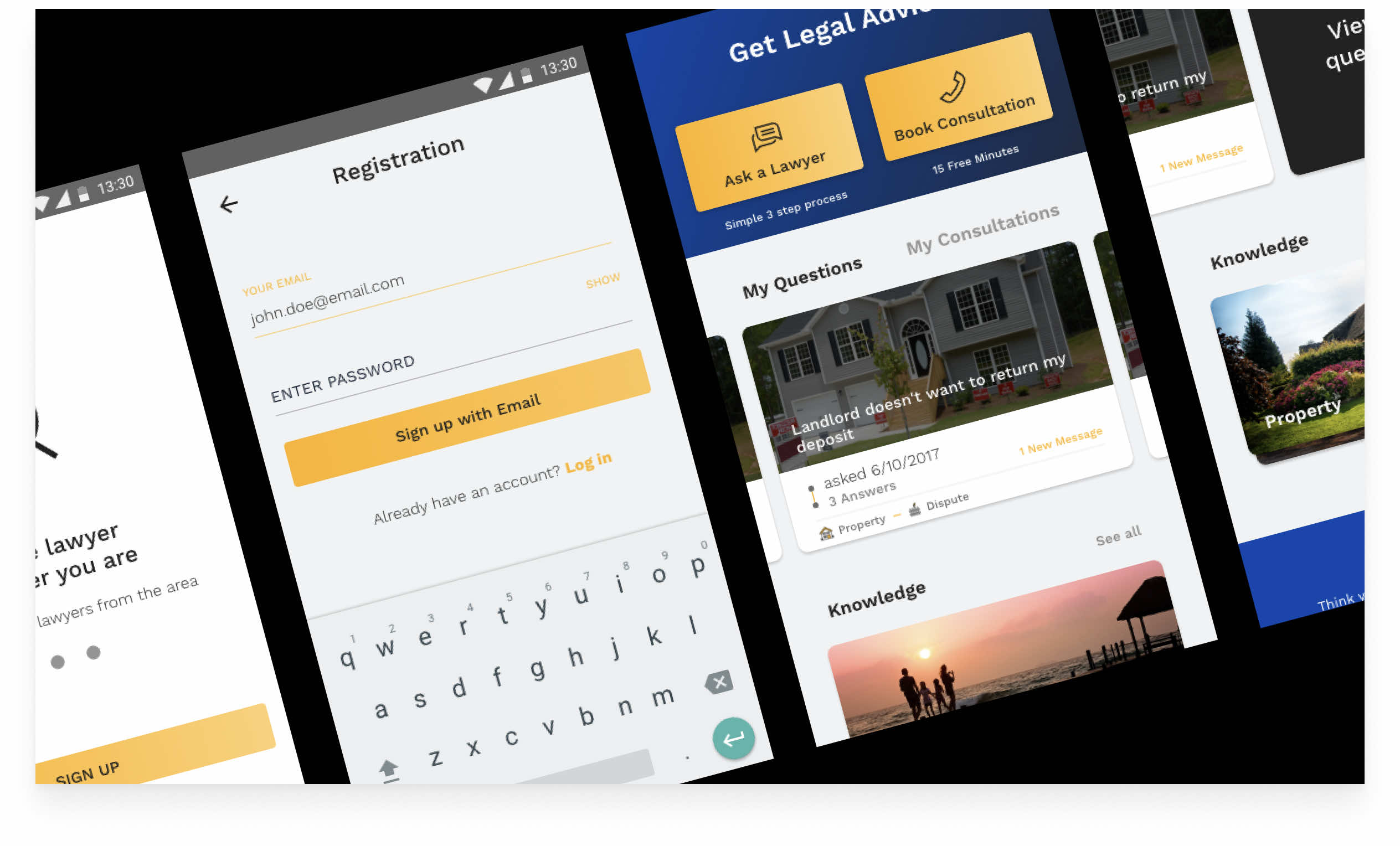 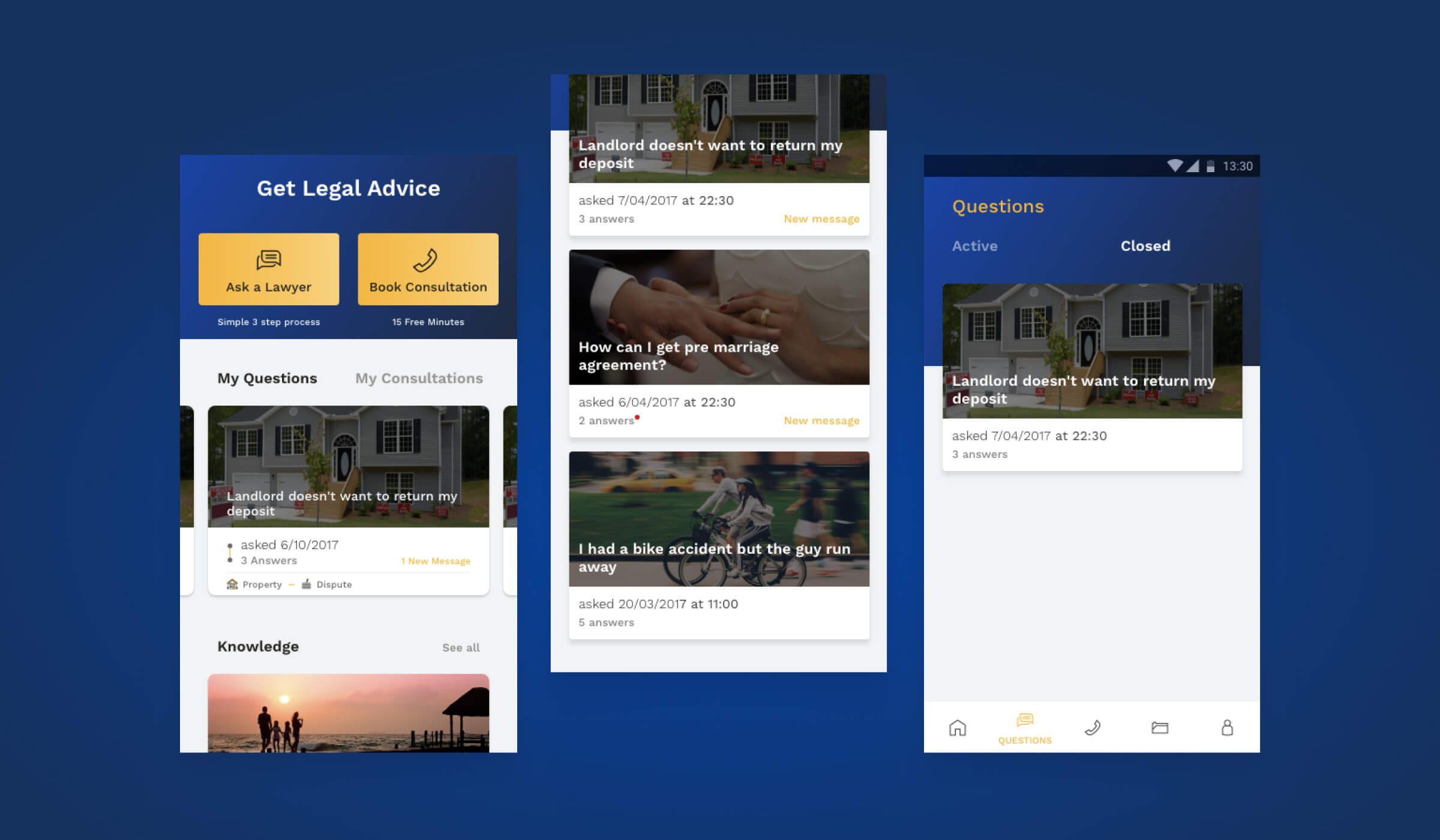 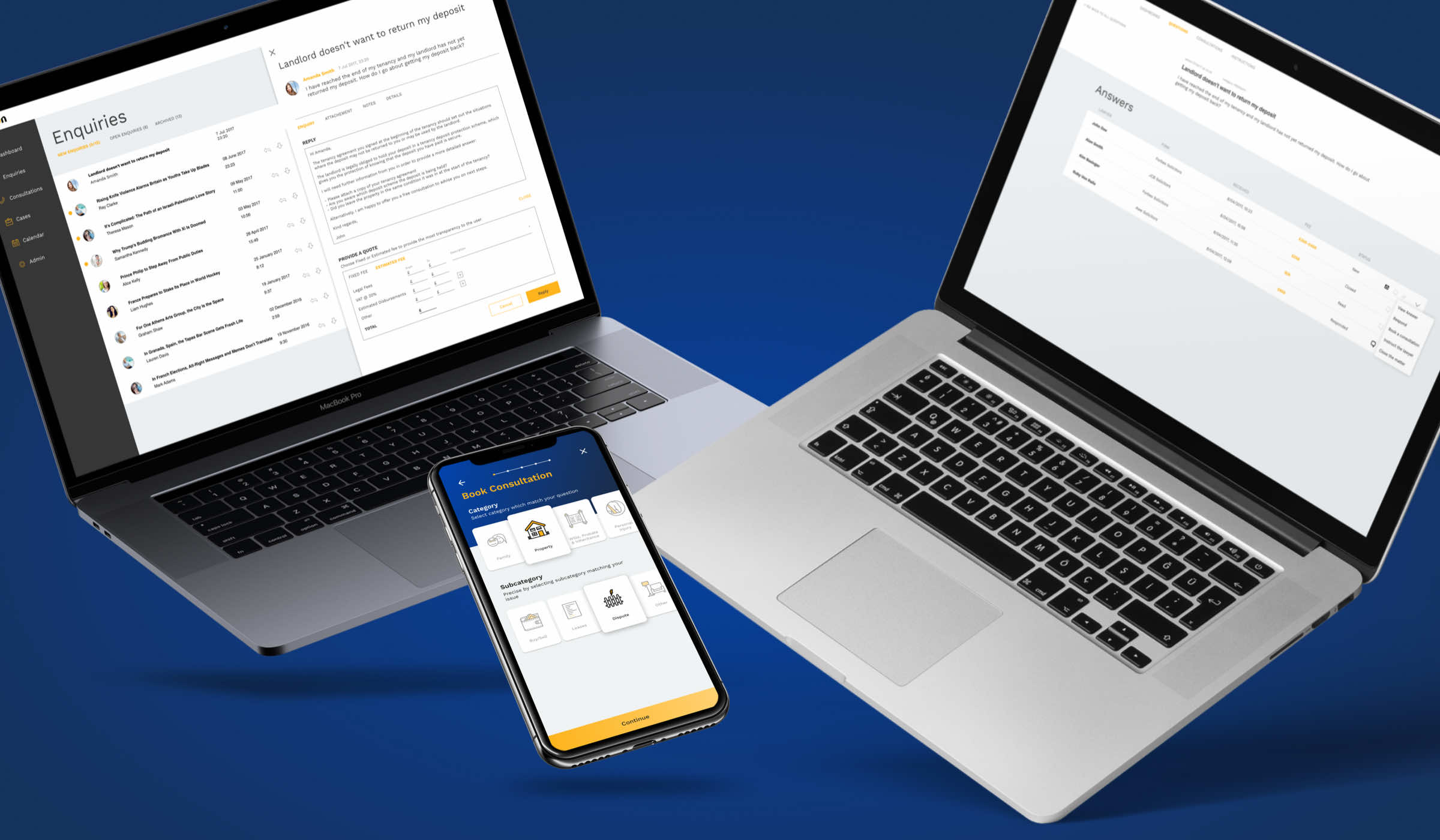 Peter has been involved with our mobile app business from inception. He initially created a strong brand identity which formed the basis of our website, apps and marketing activities. When designing the user interface of our app and website, Peter utilised industry knowledge and user testing to ensure the app’s functionality and interface provided a great user experience. I am continually impressed with the thoroughness and attention to detail Peter has in all of the work he produces. This is why I now use Peter for all of my business ventures. 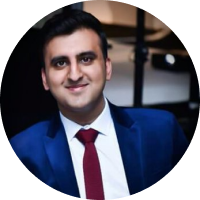 Do you like what you see and want to work with me? Email me or arrange a video call 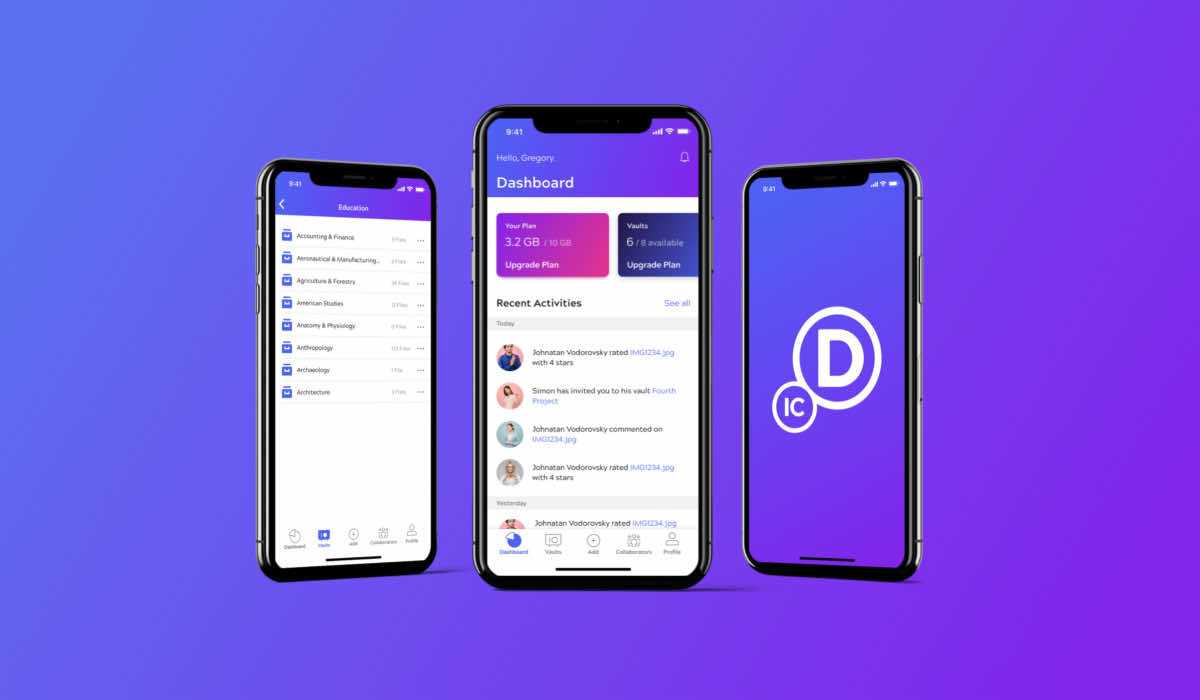 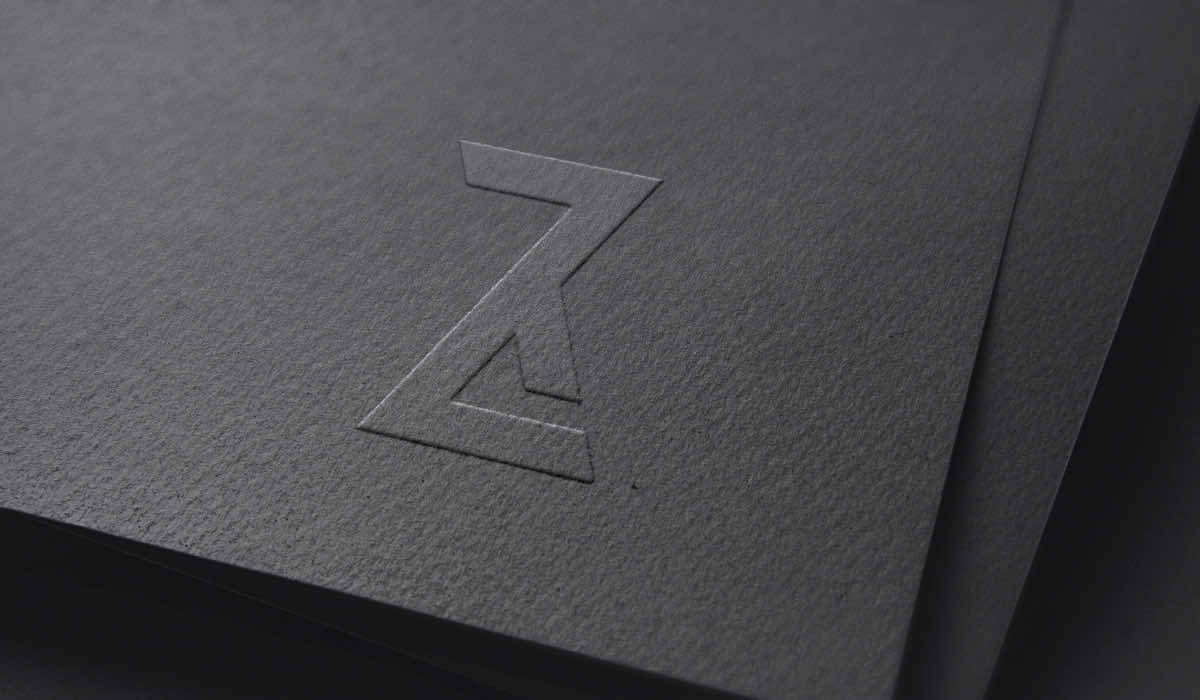